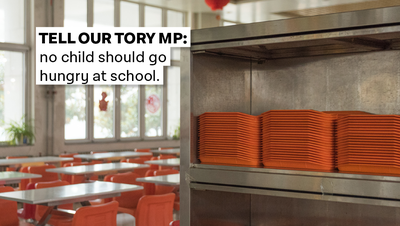 From April 1st 2018 up to 1 million children could be denied a free school meal and the school they attend denied extra funding. The date might suggest it's a cruel joke, but it's just plain cruel.

What exactly is changing?

It punishes work that pays just over the threshold.

It produces a dangerous cliff-edge, where earning a penny over the £7,400 threshold will mean a family has to find around £430 a year to pay for school meals for each child in junior or secondary school (all infant school aged children in state schools receive free school meals, regardless of parental income). I’ve been that parent, the person doing multiple online benefit calculations to work out if I’d be financially better or worse off from taking a different job or more hours. It’s not a happy place.

It’s not fair that rules are different in Northern Ireland.

For families in Northern Ireland the threshold is £14,000 rather than £7,400. I’ve not yet heard a justification for that difference. In fact, one of the DUP MP’s Jim Shannon had signed an early day motion attacking the the cuts planned for England and then backed the Tories in voting through the changes! Eurgh, doesn’t the hypocrisy make you sick? This difference in rules is what has led to the headlines accusing the Tories of buying the votes of the DUP; the ten MPs who maintain their wafer thin majority.

It reduces funding to schools.

Why are the Tories accusing Labour of scaremongering?

They’re a bit confused. The Tories are claiming that no free school meals or the pupil premium school funding that comes with it will be taken away from children already entitled to and receiving it. That’s true - the problem is not that meals are being taken from families that have already claimed - but that families who claim after 1st April 2018 will be treated differently. It’s not that difficult to understand is it? Let me be clear:

Why are the Tories claiming 50,000 more children will be entitled to free school meals?

The Tories would like us to believe that they’re being really lovely. Let’s jump back to before Universal Credit, and to those still currently claiming the old benefits where Universal Credit has not yet been fully rolled out. Under the old benefits system anyone earning over £6,240 would not be eligible for free school meals. This has now increased to £7,400 - which is where the Tories get their figure of 50,000 more children being eligible by 2022.
Don’t be fooled by this claim. Think about how you would have voted…

Option A: Keep the 'transitional arrangement’ so that all children of families claiming Universal Credit are eligible for free school meals, their school entitled to additional pupil premium funding, and parents free to take more hours without fear of being worse off.

Option B: Abandon the ‘transitional arrangement’ and the chance to help a million children and their families, but slightly increase the threshold so that just 50,000 more children will be entitled to free school meals.

Don't let him and his party get away with it. Write to him, email him, tweet him, get on facebook and tell him what you think. If you're reading this from outside of Weston-super-Mare you can find out who your MP is here and check how they voted here.

And most importantly sign the petition and join us to ensure they don't get away with it for much longer by delivering leaflets, canvassing or coming along to meetings with your ideas and enthusiasm.